I’ve finally gotten through another book during my hectic schedule! I promise more reviews, and excellent blogging content is coming back as soon as I finish my summer II session August 9th. I had not adequately prepared for how busy I actually turned out to be, but it’s only temporary, and I’ve been able to learn a lot more about blogging, in general, to add to the content on this website, so don’t lose faith in me!

Now onto Detour! Kacey Shea is an entirely new author to me, and I honestly can’t even remember how I heard about the novel in the first place. I’m assuming I saw a link on social media and downloaded through there because that’s usually where I find new authors to read.

I took about three weeks to read the novel, but not because it wasn’t interesting. I just had so much on my plate, and I really wanted to sit down and read it, but then I would always end up having 8 other things I needed to do so I’d have to put it down, but I’ve finally finished it, and I’m ready to share my opinion with the world!! 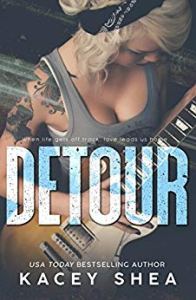 Trent Donovan is the ultimate rock star. Ladies flock to him and his toxically sexy ways. He loves the attention he gets, and he isn’t planning on settling down anytime soon. That is until he meets Lexi Marx. She’s a badass indie singer who’s joined their tour as an opening act. At first, he doesn’t think much of her except she’s naturally hot. But things take a turn when he realizes there’s a lot more to her than he ever knew.

I enjoyed the story, and I would read something from Shea again. I think I need to take a break from the dramatic storytelling, but there’s nothing wrong with that. I just can’t read very dramatic romances back-to-back. I need some romcom in between.

Thank you for reading!

Have you ever read Kacey Shea before? Do you plan on reading this rock star romance? Are you into these types of novels? Let me know in the comments!

Click here to see who else I’ve tried for the very first time this year! More suggestions are highly encouraged!