This week I’ll be reviewing Claire Kingsley’s most recent release and the second novel in her Miles Family Series! I absolutely loved Broken Miles when it came out in March, and I had time to reread the novel before this release. I fell a little behind in homework, but that’s okay because it was totally worth it! 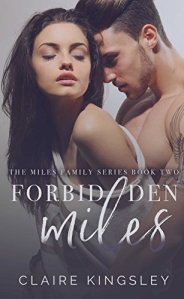 Brynn Miles is used to being the baby of the family even though she absolutely hates it. No one sees her as the adult she is except her sister-in-law, Zoe. At least, until things between a certain family friend change. She’s known him her whole life, but he’s never really noticed her. Not like how he does now. And it’s everything she ever hoped it could be. She just wishes everyone in her family would stop seeing her as a little girl and accept the fact that she’s growing up, and that she’s fallen in love.

I loved it and would totally recommend it! This novel can be read on its own, but I highly suggest reading Broken Miles first! Link for the first in the series is at the top of the post!

Thank you for reading!

Have you read Claire Kingsley before? Are you interested in giving her a shot? To learn more about her and get in contact, join her interactive Facebook Group! I’m in there, and I freaking love it! It’s such a supportive group with awesome fellow romance readers.