Today, I’m doing a very different type of romance from my usual crowd. Jade West writes on the darker, smuttier side of romance and that’s not an insult at all. Usually, I enjoy romances that are incredibly sweet or funny, but she’s always done a fantastic job of sucking me into her kinky stories. Her stories always go there, but she will still make the characters go through their development and evolution while making everything incredibly emotional as well.

This book was published earlier in the year and is her most recent release. I’m not sure when she’ll release another because I think she’s gone on a break for personal reasons. Either way, I’ll be awaiting whatever taboo storyline she does next!

One Too Many by Jade West 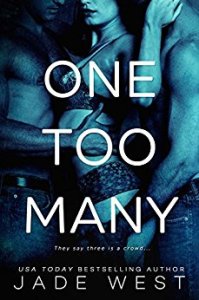 Brett and Grace have lost that certain spark in their marriage. Nobody is to blame except time and circumstances as they lean on their last leg financially, finding themselves accepting that losing their livelihood could very much be in their future. That is until Thomas appears and gives them an offer they just can’t refuse. Too severely do they need the money he’s offering them and the excitement that comes along with it. They’re just not sure if his true intentions, which might be more diabolical than they could have ever imagined.

The story got pretty kinky and intense in some parts, making me read with wide eyes, but I enjoyed the romance between the three characters a lot. I don’t want to give too much away, but I do wish the ending had been different. I hope there will be a sequel of continuation, but I’m not sure if West is finished with this story. We shall see!